Oukitel U19: imitator of iPhone X sells below 100EUR 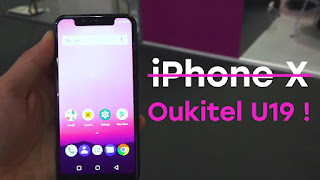 As is known to us, the newest popular trend is a machine that is similar to the iPhone with a lower price than the former, and the Oukitel manufacturer has produced a model called Oukitel U19 exactly match the features. It is said that its price is about 100 EUR with a 5.85 inch screen that the ratio ups to 19:8, which will bring a vivid and colorful vision, with the help of 2+16GB combination, 3600mAh built in battery, 13 + 2 MP dual rear camera plus 5 MP front camera and Android 8.1 Oreo system that the performance is real amazing and unforgettable.


In addition, it is equipped with MT6739 Quad core ARM Cortex A53 processor, which certainly will not give you a superior performance compared to the iPhone X, but its cost is much lower than any model of the iPhone. On the other side, Oukitel choose to focus on the design that the U19 and the Oukitel U18 are almost identical to iPhone X.

The U19 will be released on the Chinese market and only a few weeks later will see it in the European market. It is said that the price is 100 USD, which is equivalent to 80EUR. However, the Oukitel Store official website indicates that once it arrives in Europe, its’ price will exceed 110EUR.

What can be sure is that the Oukitel mobile will provide better performance and using experience such as the phone of the Oukitel K10 compared to the other machines among the same price rank.