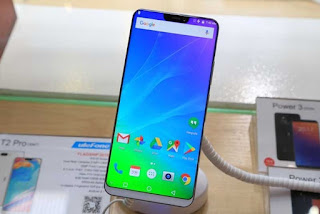 The Ulefone T2 Pro was first seen at the Barcelona Mobile Congress, which surprised all the participants that it is more like a concept instead of a commercial pattern, for it is equipped with a big screen without frame and the price is reasonable that everyone can afford.


In terms of performance, as far as the known Helio P70 of the Antutu score, its performance has reached 156,906 that the CPU part not only surpasses the Deca-core flagship Helio X30, but also substantially ahead of Qualcomm Snapdragon 660 processor almost 50%. The T2 Pro integrates components such as a handset, light distance sensor and front camera in the “bangs” section, which shows the precise of its assembly process and design. Meanwhile, different from what we now see as the full-screen mobile phone, which is equipped with an 18:9 aspect ratio display, that the ulefone T2 Pro's screen aspect ratio is 19:9, which is more slender and beautiful than the Ulefone X.

As for the hardware configuration, it is the first one equipped with the Helio P70 processor with the help of 8GB RAM plus 128GB ROM that the performance is very powerful. In addition, Ulefone T2 Pro use rear 21MP +13MP HD dual camera, front 16 MP self-timer camera that the pictures are clear and beautiful. What's more, it was built-in a 5000mAh large capacity battery that is equivalent to the most power bank in the market.

Except the T2 Pro, there is also the simplified version—Ulefone T2 met with us in the display that exclude the 18:9 screen and the fingerprint on the back side, both of them equipped with the almost same specifications while the T2 is equipped with Helio P60 and 6GB RAM.

The two versions of the Ulefone T2 will begin in August 2018 while the release date and sell price of the T2 Pro has been posted on Ulefoneshop, more detail information can click here: https://www.ulefoneshop.com/buy-ulefone-mobile