Ulefone X sells for the lowest price with the best functions 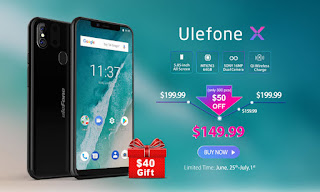 The newest machine of the Ulefone X has released, and we can find it on the basis of the Kimovil of the UlefoneShop and buy it with the lowest price. It looks like the iPhone X with the similar functions.


In fact, each manufacturer has the cloner of the Apple especially the iPhone X, which is common and everyone will not be surprised about it. In addition, the Ulefone X and the Ulefone T2 Pro have the gap on the screen like the iPhone X that the former is designed with the size of 73.4 x 150.9 x 9.1mm and 165g with the help of the 5.85 inch 19:9 screen that the resolution is 1512 * 720 Pixels. What's more, it is also equipped with a 2.5 inch GFF lighting curved glass screen.

The processor it equipped is the Helio P23（MT6763 with the frequency of 2GHz and the GPU is ARM Mali-G71 MP2 with the help of the 4GB 64GB memory combination that support the SD card ups to 256GB that the performance is fast and unforgettable like the phone of the Ulefone Power 5 on the basis of the Android 8.1 OS.

Ulefone X is equipped with two Sony rear camera including the SONY IMX135 13 MP plus 5.0 MP. As for the front camera, it uses a 8MP with the functions of the Face and Fingerprint unlock, bluetooth 4.0 and two sim card two standby that the Antutu score is 83,998, which is higher than the Ulefone Armor 2.

The Ulefone X is the best choice for you to buy with the reasonable price that can easily misregard to the other models especially the iPhone X. What more important is that it just sells for $159.99 on the Ulefone Shop with the entire package that is said to be much cheaper than the Ulefone Power 3S.