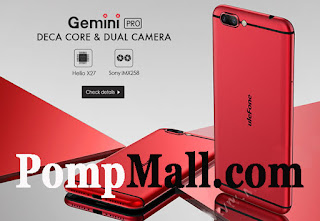 
Gemini Pro's design style is far from the first generation of products, Gemini Pro replaced the popular rounded ID, supplemented by eye-catching "Chinese red" color (another black version), the main part of the oval processing is very popular, and using a pre-fingerprint identification program, the interface for the USB-C standard.

In fact ,Ulefone phones are very cost-effective.Such as Ulefone power 2 has 6050mAh battery ,which is more attracyive.And the next it will be released Ulefone Armor 2.No matter when it will be released,we will always pay attention to it.