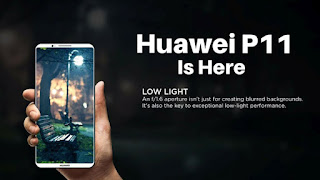 There are few new machines to be released in the mobile market at the ending of this year, including the brand of Huawei. According to the convention of Huawei that the flagship of Huawei P11 will be released in February next year that Huawei has not relax itself and it is under preparing for the release of the P11.


It is said that the new machine will be designed like the iPhone X with a notch on the top of the back side, which looks unique that do not influence the whole appearance while the phone of the Huawei Honor V10 without this design.

Seen from the configuration file, this new machine is equipped with a 6.0 inch screen with the resolution of 2244 × 1080 pixels that will give us a colorful vision that the performance will be as well as the Huawei Mate 10, which has earned a high reputation.

According to the exposed news that this flagship has some breakthrough on the camera that it is said to be equipped with“ProTriple-lens” design with the 40.0MP plus the function of five times hybrid zoom while the Huawei Nova 2s just with 20.0 MP camera, which will attract many people who have high requests for the camera of the phone.

How about the other aspects? It will be equipped with Kirin 970 processor like the Huawei Nova 3 that the performance will be amazing and impressive on the basis of Android 8.0 OS with 6GB RAM +128GB ROM that can compared to the phone of the Huawei Mate 10 Pro.