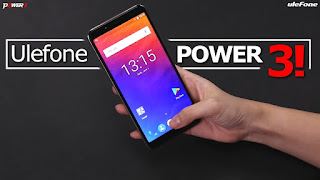 There is few people know the brand of the Ulefone, but its products sell great in the foreign market that it has released several new machines this year, and the one of the most popular is the Ulefone Armor 2 that support IP68, which will bring much convenience in our daily life.


Although the products equipped with the Helio P23 processor have begun to be sold publicly, it has not yet seen the models built-in MT6763 in China. In fact, there is a phone called Ulefone Power 3 is equipped with this processor, which will update on the Pompmall soon. On the official website we can see that it is described simply with the words--“World's First MT6763 18:9 4-Camera Big Battery Flagship”. In other words, it will equip with MT6763 processor with the popular full screen design while the Ulefone MIX 2 is equipped with the MT6737 processor that the screen ratio ups to 18:9 like the phone of the Xiaomi Mi MIX 2, which looks very beautiful.

What’s more, it continues the feature of big battery like the phone of the Ulefone Power 2 that built in a 6080 mAh battery and we do not need to worry the power is not enough when we go out. In addition, the Ulefone Power 3 has 6GB running memory, support for face recognition technology, and from the renderings we know that it applies the all-metal body design. Last but not the least, the price of this new machine has not been exposed, but it will not let us to wait for a long time.