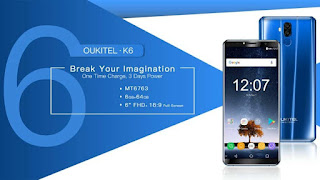 There are more and more cross-border e-commerce companies use the MediaTek processor that not only because that it will bring us a fast and smooth running speed, but also the reasonable price such as the brand of the OUKITEL that many its products are equipped with this processor, and its new machine of the OUKITEL K6 is featured with MT6763 Octa core processor.


Except the popular feature of new SOC, the other design features like the full screen design, large memory and battery have also applied on it. It is equipped with a 6.0 inch screen that the screen ratio up to 18:9 with the resolution of 2160*1080 that is the same as the OUKITEL K10. In addition, it looks very slim with the size of 158.7 * 76.3 * 10.4mm, although it built in a 6300mAh unmovable battery with the light shell design, which has not applied on the OUKITEL MIX 2.

It is also the version that equipped with big memory combination that with the help of the 6GB RAM+64GB ROM that the operate speed is amazing and unforgettable that is much bigger than the phone of the OUKITEL U18. What’s more, it is equipped with four cameras including 8MP+13MP front cameras plus 8MP+21MP rear cameras on the basis of the Android 7.0 OS, NFC technology and fingerprint function while the OUKITEL K10000 Pro do not support the NFC function that you will like it after you use it for a while.