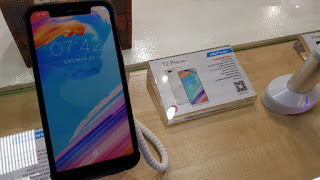 The Mediatek Helio P60 is the one big announcement for the chipmaker at MWC 2018, being a rather compelling chip for mid-range and upper mid-range smartphones. And this week, at Chinese manufacturer Ulefone mobile stand at MWC, we see two phones packing a P40 and P70. Of course, these chips haven’t even been announced by Mediatek yet. So what makes them different?


Ulefone stand confirms that both chips will be octacore designs, with the Ulefone T2 Pro packing the P70 and the standard T2 offering a P40 chipset. Interestingly enough, the T2 Pro spec sheet also claims that it will support an in-display fingerprint scanner.

This is a phone that Ulefone is positioning as the world’s first smartphone equipped with a MediaTek Helio P70 processor. This is further padded out by the Ulefone T2 Pro featuring 8GB RAM and 128GB storage. Making this on paper, a powerful smartphone before even considering the other selling points such as an in-display fingerprint sensor, facial recognition support, and a dual rear camera setup – comprised of a 21-megapixel camera along with a 13-megapixel secondary camera.