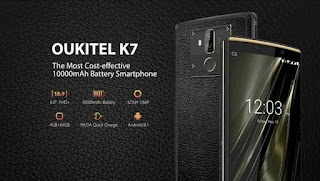 Earlier this month, we got the news said that the Oukitel K7 used a huge 10,000mAh battery. It is time for this phone to be officially released recently, and we have re-exhibited some of the features of the K7.


In terms of specifications, the K7 is equipped with a 6-inch 18:9 FHD+ display and is supported by the MT6750T processor with the help of 4GB RAM + 64GB ROM and 13MP + 5MP dual rear camera that the performance is amazing and unforgettable like the Oukitel K10.

It is said that the 10000mAh battery can last more than 50 days in the position of “2G Standby” that is much longer than the phone of the Oukitel U19, which is a pretty impressive feat considers how big the battery really is. What’s more, it can be full charged within three hours and forty minutes with the original fast charger.
Although we do not have a specific release date, Oukitel claims that K7 will be released in early June. The retail price of the phone is about $180, and now Oukitel Store official website only sell it with the price of $99.99 now that you can buy this dual camera plus 18:9 display and 10,000mAh battery device that is much cheaper than the Oukitel WP5000.