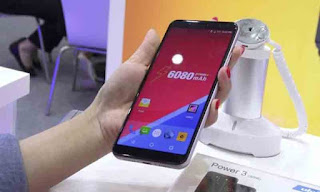 Chinese manufacturers have released many machines with high specifications and competitive price in Indonesia that Ulefone Smartphone earned high reputation for the popular of the mobiles made in China. Meanwhile, Ulefone will release a high-performance machine--Ulefone Power 3S in Indonesia.

As for the camera, the Power 3S features a dual 16 MP + 5 MP rear camera with dual LED flash. At the same time, in order to meet the needs of self-timer and video call, the front camera are 13MP + 5 MP with the function of touch focus, face detection, HDR and panorama with the help of the latest Android 8.0 operating system, and Ulefone Power 3 is also about to be upgraded to this new OS.

What's more, the Power 3S features with MT6763--Helio P23 2.0 processor with the help of the GPU Mali-G71 MP2 700 Mhz graphics processing that the performance is wonderful like the phone of the Ulefone Power 5. Although it is equipped with 4GB + 64GB memory combination, it supports the SD card ups to 256GB that is very convenience to use. Last but not least, it is reported that the Ulefone high-end flagships such as the Ulefone X and the Ulefone T2 Pro will also release soon.