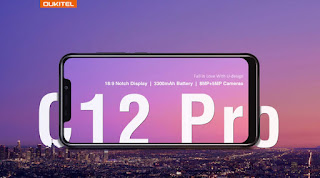 
Part of the Oukitel C12 Pro specification is shown in the official poster, which uses a 6.18-inch 18:9 Notch Display, 3,300 mAh battery, dual rear camera, 8.0MP + 5.0MP. We contacted the official customer service and knew some specifications, the MediaTek MT6739 processor, and will be equipped with 2GB of RAM, 16GB ROM, it will run Android 8.1 Oreo.

The Oukitel C12 Pro is expected to be available in September, and the official price has not yet been announced, but it will be quite affordable based on leaked specifications.