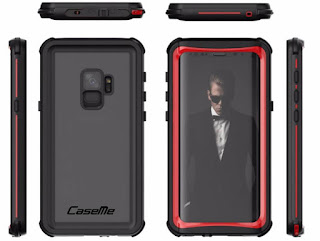 Reports claim that Samsung will be unveiling the device to the world on the 27th of February. With only two months away from it being launched, the company has finalized the design and are likely working closely with accessory makers in preparation. Case manufacturer CaseMe Case has begun developing their case of the Galaxy S9, and in doing so they have also created a render of the device as well.


On the contrary, latest rumors suggest that the Galaxy S9 and Galaxy S9 Plus will differ much more than their predecessors did, with the most obvious separation point being their camera setups. While the 6.2-inch Galaxy S9 Plus appears to be set to succeed the dual-camera setup featured by the Galaxy Note 8 with some minor improvements, its 5.8-inch counterpart will once again ship with a single-lens imaging system, as suggested by the newly shared renders. A physical Bixby key will still be part of the package, whereas a fingerprint reader will now be placed beneath the handset’s camera instead of next to it with the goal of being more accessible. The area occupied by the scanner on the Galaxy S8 is now taken up by a dual-LED (dual-tone) flash and a heart rate monitor that were previously found to the left of the flagship’s rear lens. The camera bump found on the back of the Galaxy S9 is said to be barely noticeable, while the device’s top and bottom bezels appear to be marginally slimmer than the ones found on its direct predecessor.

While previous leaks had suggested the S9 was due for a March release, Caseme has suggested a late February launch following an official announcement earlier in the month.