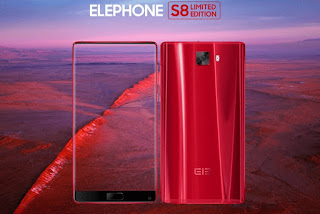 The brand of the Elephone come from Shenzhen focus its attention on the foreign market, and there is no doubt that few customer in domestic market know it, but the great result is that its reputation is much good than we thought, especially the release of the Elephone S8, which is very popular at abroad, and it also makes the brand earned many fans.


Comparing to the last generation, this version is equipped with the full screen design like the phone of the Xiaomi Mi MIX 2 that the design is very popular this year. After waiting for a long time, Elephone S8 black and blue version is in stock and the supply is stable that many fans have got it and more customers want to get one can buy it at here: http://www.pompmall.com .

The Elephone official has announced that the S8 will provide the black, blue and red version for us to choose at the release conference, but the red version has not appeared until several days ago after the other two versions have sold for a long time, and the fans now are hesitate to decide which model to buy as it is said that the Elephone S9 is under preparing.

According to the news come from the Pompmall, the red version will start send out within next week that it is no doubt to get one in hand while the S9 and the Elephone S8 Pro has not released yet, and we are not sure about the available time, which will be a long time to wait.

Although we have to wait for a long time before each new machine start sell, it is worth waiting for it with the high equipment and the price is affordable. On the other hand, this year is a bumper year for the Elephone that the S8 has got a great sell result, and it is said that except the machines mentioned above, there is another machine—Elephone Fighter is under preparing.