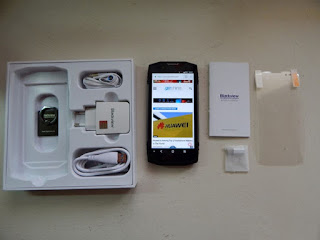 When many manufacturers are pursuing for the design of the full screen, Blackview found another aspect that will be the next popular feature apply on the mobile phone—Anti-three feature, and not just thinking about it, the company has took it into action that has brought us several models with this desigm, and the newest one is the Blackview BV9000 Pro.


This kind of mobile is a special version Smartphone that was designed to meet the special requests for the processors who usually working on the hard environment, and comparing to the mobiles looks beautiful but without this feature such as the Blackview P6000 and the Blackview S8 that most of them will choose the former, which except the reason above, but also the reason for cheaper price.

Comparing to the last generation of the Blackview BV8000 Pro, this version has improved a lot that it is equipped with a 5.7 inch screen with the screen ratio ups to 18:9 with a protective film covered on it that looks very beautiful. In addition, the IP 68 certificate is completely that it can work normally under 1.5 meter water etc. environments, which is impossible for the phone of the Blackview P10000 Pro.

As for the detail configuration, it is equipped with MTK6757CD Octa core processor that is the same as the Blackview P6000 Plus and it will bring us an amazing and unforgettable running speed with the help of the 6GB RAM+128GB ROM memory combination. It is ready to send to you on Pompmall, any question please contact us at any time and more detail please look at here: http://www.pompmall.com/blackview-bv9000-pro.html.