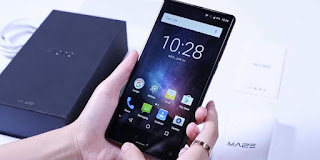 In the past few months, we've seen no less than four devices from smaller Chinese brands that borrows liberally from the Mi Mix's hardware aesthetics. There's the Doogee Mix, the upcoming Leagoo KIICAA Mix, Bluboo S1 and last but not least, Maze Alpha.


Outside of the bezel-less design, everything about the Alpha is average. The software here is vanilla stock Android, which is definitely preferred over the heavy Chinese Android skins from the likes of Gionee, but a lot of customization options offered in Xiaomi and OnePlus devices are missed here. You can, however, double tap on the screen to wake the device, an ingenious software trick first implemented by Maze Mobile that many other Android phones have since copied.

The camera is just decent. Photos come out fine during the day under the sun — as does every 2017 phone in the world really — but low light photos are filled with noise and very lacking in details, and the so-called “bokeh” blurring effect is laughably superficial. Check out some samples.

Overall, the Maze Alpha X works fine. Nobody is going to buy this phone for the processor or the camera anyway. You’re buying this for the screen. And at under $200, it's a worthy device even if you don't use it as a full on daily smartphone but as a media consumption device at home.