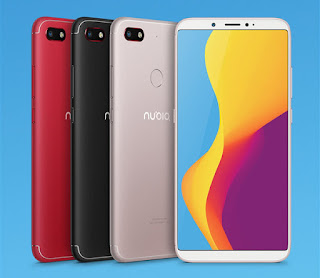 The brand of the Nubia earns a great reputation at home and abroad, although its scale is not as large as the Xiaomi and Huawei that especially in the foreign market that many customers are prefer the Nubia instead of the other brands. Not long ago, there is a new machine leaked on the internet with the name of Nubia V18 that has attracted many fans and now, it is ready to send out on GizOK.


Appearance, Nubia V18 follows the Nubia aRC arc design that the visual thickness is as thin as 6mm with the colors of black, gold and red, it is also said that it will also provide the white version for the customers that leaves more choices while the Nubia Z17 miniS just provides three colors, but the white version has not released yet that may a little delay.

In terms of configuration, the V18 uses a 6.01 inch 18:9 full screen with a resolution of 2160×1080 that will bring us a clear and colorful vision with the screen capture ratio reaches 86.25% while the Nubia Z17S is equipped with a 5.73 inch screen. The Qualcomm Snapdragon 625 processor is equipped with 4GB RAM plus 64GB ROM that is not very big compared to the phone of the Nubia Z17, but it is enough for us with normal usage with the help of the battery capacity is 4000mAh on the basis of the pre-installed nubia UI5.1 system.

According to the states of the official, it is equipped with NeoPower 3.0's battery life technology that through system optimization and high-performance but low-power hardware, the energy efficiency is maximized and it is fully charged once a day for two days like the phone of the Huawei P20 although the battery capacity is not big, it can keep working for a long time.