FCC confirms that Gold iPhone X will be released in September 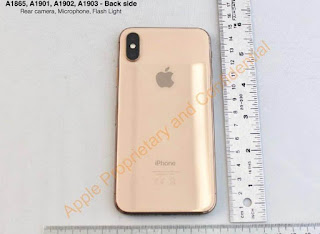 Newly published papers by the United States Federal Communications Commission (FCC) reveal Apple scrapped a third variant of the iPhone X just prior to launch. Apple filed paperwork for a gold edition (similar to the gold iPhone 8 and iPhone 8 Plus) to the FCC in September, but the model made it to market.


Other documents indicate Apple had prepared its FCC filing in July, suggesting the photos were taken as much as several months ahead of the iPhone X unveiling in September. While many of the documents in the filing were available soon after submission, external photos and other sensitive details were subject to a six-month confidentiality clause that only recently expired.

One interesting tidbit that might have passed you by: The FCC labels say "LCD display" instead of "OLED display." It's a small nugget, but it could be a clue. The iPhone X has an OLED display. All other iPhones have an LCD display.

As always with these kinds of leaks, take the news with a grain of salt. A gold color could boost iPhone X sales, but then again, it could be a canned color that'll never see the light of day. If you're considering an iPhone X, we wouldn't wait on this rumor. Just get an iPhone X.