How to Get Ulefone Power 5 Giveaway at Ulefone Fan Festival 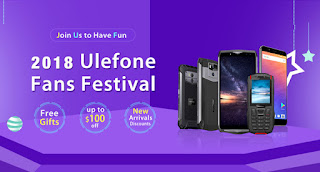 Ulefone has just announced that the ‘Ulefone Fan Festival’ activity has started, and the company actually decided to discount some of its products as part of it, not to mention that Ulefone is giving away coupons as well. The main prize is the Ulefone Power 5, as Ulefone will give away one Power 5 smartphone when this activity ends, and that will happen on April 30, you need timely attention and share the official mall.


You can now subscribe to the arrival of the Ulefone Power 5 and Armor X, as both devices will become available in 9 days, on April 25. The Ulefone Power 5 is the company’s latest big battery handset, it sports a huge 13,000mAh non-removable battery, while it also supports wireless charging. This smartphone comes with four cameras, 6GB of RAM and 64GB of native storage, in case you were wondering, while this phone also can take a beating, it’s not fragile by any means.

The Ulefone Armor X, on the other hand, is a rugged handset, it sports a 5,500mAh non-removable battery, an 18:9 display, and it is also IP68 certified for water and dust resistance. The phone comes with 2GB of RAM and 16GB of native storage, while it sports capacitive keys below its display.