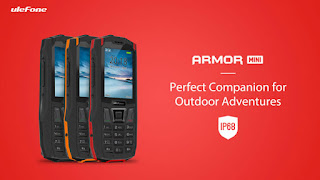 Ulefone is getting ready to release many devices in the near future that are worth waiting for. This time they give a dose of two handsets that they have been working on, the rugged feature phone Ulefone Mini and another big battery smartphone, Ulefone T2 Pro.


Speaking of feature phones, we can’t skip Nokia who has been the most dominant force. And Ulefone mobile will join the market as well with Ulefone Armor Mini which is a rugged feature phone. Featuring IP68 dust-proof and waterproof protection grade and solid design, the Ulefone Mini is rugged cope with any rough and harsh environments such as dirt, mud, sand or in the water.

In terms of specifications, Ulefone Armor Mini does come with a single camera, which is located on its back, and a small display, well, small on smartphone standards, perfectly regular when it comes to cellphone standards. The Ulefone Armor Mini comes with IP68 certification for water and dust resistance, which is not surprising considering this is a rugged smartphone. The Ulefone Armor Mini can handle being submerged in water up to 1.5m for up to 30 minutes. The device sports a 2.4-inch QVGA (320 x 240) display, while it is fueled by the MediaTek 6261D processor. The Ulefone Armor Mini packs in 32GB of RAM and 32MB of internal storage, while a 0.3-megapixel camera sits on the back of this smartphone. Ulefone has included a 2,500mAh non-removable battery inside of this smartphone, and two SIM card slots are also available. FM Radio is also included in the package, and you won’t even need earphones in order to listen to it, you can use the phone’s loudspeaker.

The company claims that you will be able to get about 21 days of standby time and 12 hours of talk time with this smartphone, while the phone also supports reverse charging, so you can use it as a small power bank as well. The Ulefone Armor Mini sports a physical flashlight button on the side as well, and if you double-press that key, you will trigger the phone’s SOS functionality, so it essentially doubles as an SOS button.