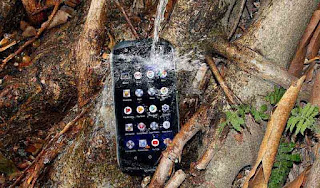 OUKITEL Mobile announced its newest “tri-proof” (that is, shock, water and dust) smartphone, the WP5000. After more than a month without word on release, OUKITEL is ready to release it for pre-orders, starting April 17th.


The company also emphasizes the WP5000’s battery, as the device comes with a 5,200mAh non-removable unit. You will also be able to utilize 9V/2A fast charging when it comes to this smartphone. OUKITEL says that the OUKITEL WP5000 can sit on standby for 325 hours, while you can charge it up from 0 to 100-percent in two hours and 25 minutes, while 16-megapixel (Samsung’s sensor) and 5-megapixel cameras are included on the back of the device.

OUKITEL also mentions that this device comes with IP68 certification for water and dust resistance, OUKITEL also included an IP68-rated speaker inside the phone, to ensure a centralized voice experience that always sounds clear.

OUKITEL also mentioned an app called ‘Zello’, which emulates push-to-talk walkie-talkie like communication. And last, but not least, GPS and geomagnetic sensor, both of which are included in the OUKITEL WP5000, says the company.